All you need to know about embedded Android

The world would not function without embedded systems. We are surrounded by embedded Android and yet most people don’t even know it. Embedded Android powers vending machines, point-of-sale (POS) terminals at gas stations and stores, parking meters, car infotainment systems, TVs, central heating, factory robots, and hundreds of other types of devices.

Embedded Android is not limited to specific sectors or industries. Any company that uses any devices, generally speaking, is a candidate for using Android embedded in that device.

Specific, real-life examples of the Android embedded system in operation include:

In the world of the Internet of Things (IoT), where smart devices operate in a connected fashion, embedded Android is more crucial than ever. Embedded systems for IoT are one of the primary drivers of the popularity of embedded Android.

An embedded system is a computer system that is designed to run on non-conventional devices. The device often performs a dedicated function, but doesn’t have to.

Embedded devices must often be robust because they tend to be used in high-demand environments, and replacing them is generally not as easy as replacing a mobile phone or computer.

Is Android an embedded system?

Stock Android is not a classic embedded operating system in its original form. Nevertheless, it is becoming more and more popular as one. Embedded Android has many of the same advantages as embedded Linux, while additionally offering an exquisite user interface and familiar programming interface.

Where is embedded Android used?

Embedded Android is used in digital signage, point of sale terminals, automotive infotainment systems and dozens of other devices. The primary challenge when choosing Android as an embedded system is the wide variety of hardware available. To make Android work on embedded devices, you need to invest enormous effort and have tremendous know-how on how to modify the Android operating system.

Alternatively, you could use a ready-made embedded Android solution such as emteria.OS.

There used to be an official embedded Android project where versions of embedded Android had been created to support a wide array of underlying hardware configurations. That project was called Android Things but Google eventually shut it down.

The reasons for Google shutting down its official embedded Android project weren’t clear, but one can only guess that it had a lot to do with maintaining so many different codebases and forks.

Embedded Android essentially sits “on top” of a Linux kernel. This is also true of stock Android. Android uses the Linux kernel with some adjustments. However, it differs fundamentally from common Linux distributions, such as Debian /Raspbian/Alpine Linux.

Android provides an abstraction layer between the Linux kernel and the other components of the Android architecture. This layer is called the Hardware Abstraction Layer (HAL) and is responsible for communicating with the underlying Linux kernel. It defines a standard interface for hardware vendors to implement.

As you can imagine, this is a lot of work for every hardware configuration and chipset that exists out there. For companies that produce millions of devices a year, such as phone manufacturers, the investment is worth it. Consumers buy the devices and the company makes a return on its investment.

But the matter is different for embedded Android. There are simply too many types of devices to merit mass-scale support.

Embedded Linux was a popular choice for embedded devices before Android came around and started stealing the show. There is still plenty of support for embedded Linux configurations, with decades of code and libraries available to ensure a wide variety of compatibility.

But as the popularity of embedded Android grows, so does the available support for it.

In an embedded system, Android has certain advantages that Linux doesn't, not the least of which is a slick user experience.

Here are the main points of comparison between using Linux and Android as your embedded OS:

Out of the box, emteria.OS can run on the following architectures without the need to tweak any code whatsoever:

What hardware can you use for embedded Android?

Let’s have a look at some of the embedded Android hardware configurations that emteria can support: ROCK Pi is a Single Board Computer (SBC) that offers considerably enhanced CPU and GPU performance compared with the Raspberry Pi.

The ROCK Pi offers both an eMMC (Embedded Multimedia Card) and an M.2 SSD slot for improved internal storage. The M.2. SSD is a Solid State Drive that allows for high-performance storage in thin and low-powered devices. This makes the ROCK Pi the obvious choice over the Raspberry Pi when dealing with devices that are more storage-dependent.

The Intel NUC is a mini PC that can run embedded Android using emteria's custom-built Android version. The Intel NUC is for high-powered, mission-critical uses where devices such as the Raspberry Pi and ROCK Pi simply would not suffice.

The use cases for the Intel NUCs are wide and varied. These include:

The Intel NCU can operate using a plethora of CPU, storage, and memory configurations.

How to choose the underlying hardware for an embedded Android system?

Emteria.OS supports many hardware configurations directly out of the box. These include:

You can simply download emteria.OS from the emteria website, and then run it without any code changes on any supported device.

Once you’ve created the shortlist of which hardware configurations are supported by your version of Android, it’s necessary to narrow down the choices based on what specific capabilities you require, such as:

Completely aside from developing an embedded Android version for your specific hardware configuration, there is also the matter of software updates.

Too often, embedded Android OS development companies provide an image to a product developer, and then never furnish an update. This can lead to security holes and broken software. In some cases, failure to update an embedded Android system regularly is also a violation of the law.

The reason embedded Android OS providers don’t provide IoT OTA updates is because the required infrastructure to do this is gargantuan. And the embedded Android code needs to be specifically modified to make this possible.

To provide OTA updates, an embedded Android provider must also have the support staff to work on updates, test updates, roll them out, and have a mechanism in place to roll them back if any of them fail.

This amount of dedicated back-office support is far beyond the ability of most companies to offer.

Emteria has built all of this functionality into emteria.OS, as well as the infrastructure behind it to support these updates. Additionally, emteria offers the Device Hub that lets fleet managers remotely push updates to embedded Android devices whenever they please. The Device Hub also lets you carry out other tasks on remote devices, such as changing device settings, or provisioning the device for first use.

The entire process of managing a device remotely like this is called Mobile Device Management (MDM). The benefits of MDM are particularly obvious in retail MDM and MDM in manufacturing, where direct access to devices is not always possible.

Tutorial on how to install embedded Android

If you don’t use a ready-made solution such as emteria.OS, then installing embedded Android on your chosen hardware configuration can be quite a challenge. You would need to download the official Android project (AOSP)—250 GB—and keep an additional 150 GB of storage space free just to build it. For additional builds, you will need even more space.

Recommended RAM for building Android is as high as 64 GB. Google currently uses 72-core machines to build its Android versions, which take 40 minutes for a full-build. This is in contrast with 6-core machines which take as much as 3 hours for a single build.

Furthermore, you would need to be thoroughly experienced in both Android and Linux development, have plenty of time on your hands, and take care of the updates and code versions in the future.

Your other option is to download emteria.OS which is a fully-fledged version of embedded Android, and which receives regular updates.

How to install emteria.OS for embedded Android

Click the “Start for Free” link which will let you install emteria.OS completely for free on up to three devices.

After registering and choosing a strong password, you will receive a code to unlock the free starter plan.

Enter the code on the respective screen, and then navigate to the downloads page.

The free version of emteria.OS receives OTA updates as regularly as the paid version. And it is a fully-functional version of embedded Android.

After booting your device up, run through the basic configuration steps to set up the language, WiFi, and other settings.

Why use emteria.OS for your embedded device requirements?

Embedded Android provides users with all the familiar functionality of stock Android. It supports touch screens and has an aesthetic, smooth appearance. It is a far better choice for user-facing devices than embedded Linux. 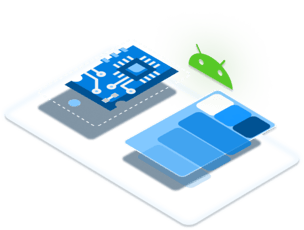 The Android codebase is constantly improving within in a considerably short timespan. These improvements filter do

wn to embedded Android versions such as emteria.OS.

Emteria.OS was developed to resolve all of these problems. The OS is actively worked on by a team of highly-skilled, expert developers. The OS supports a wide range of hardware configurations, and custom changes can be easily made for those fringe cases that don’t fully fit the mold.

Installing emteria.OS is easy, and fleet managers can decide when to feed updates to their fleet, or a subset of their fleet, using emteria’s Device Hub.

Learn more about how emteria can help your business with its fleet of embedded Android devices, visit emteria Device Hub. After long anticipation, the new Radxa ROCK 5 has been finally shipped. And Radxa did it again –...

IoT embedded system: All you need to know

The rapid progress of technology has blurred the lines between sectors. This is particularly...

Android is currently the most popular operating system in the world. Yet, perhaps because of our...