Android application development started a long time ago in 1989, contrary to your belief that it just started recently.

Plus, to make things interesting, the name isn't a tech name either, as it was simply derived from the nicknames of one of the founders, Andy Rubin.

When Andy Rubin was still working at Apple, he loved Android robots more than anything. With so much love for robots, his colleagues started calling him Android, which later became official and was also an operating system.

Andy Rubin has developed Android so that it can be used in smart cell phones that know their owner's preferences and even location.

Many people around the world are familiar with the green robot. However, few can describe the history of the logo.

Irina Block, a Google graphic designer, is known for developing the logo in 2007, stating that the logo should be international and closely related to the name. This prompted the team to draw some simple designs and sketches.

The current logo is also said to have undergone several modifications in the past. The green color is used simply because green contrasts with almost all colors, but especially with dark ones. 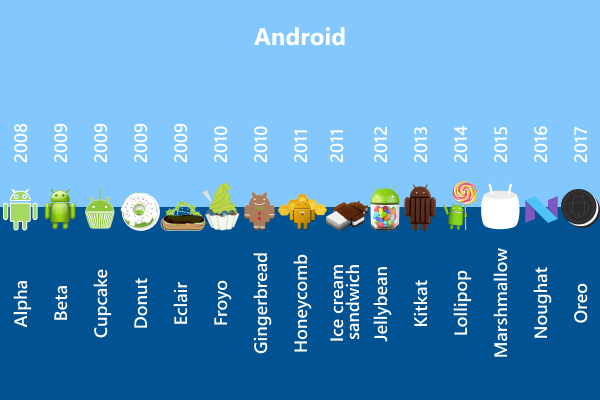 It was built by JetBrains' IntelliJ IDEA and was mainly designed for Android development. You can also choose to download it through Windows, Mac OS, and even Linux-based operating systems that you may be using.

It’s also important to have in mind that this is simply a newer version of the Eclipse Android Development Tools which was the initial IDE for Android application development.

The first stable version of Android Studio was created in December 2014. It is also known as version 1.0.

Another factor worth knowing is that on May 7, 2019, Java, the most endorsed programming language for Android app development, was replaced by Kotlin. Java is still available and supported in C++.

Since the development of the first cell phone in 2008, Android has always made updates and developed new operating systems that are up to date. There are 12 versions of the operating system installed in more than 3 billion devices around the world.

In addition, they have also developed five Pixel phone models, which have not swamped the market as much as might have been expected, despite an extensive market campaign.

In the beginning, Android versions were named after some sweet treats and even desserts, with their initial letters following the order of the alphabet. Starting with Android 10, this changed and only simple numbers were used as names.

Now, let's take a closer look at the long list of Android versions and explore how they have evolved over time.

And since it was the first version, it had simple or rather basic applications that people could use. Some of the applications found in this operating system are:

All these started all the way back in April 2009.

Other functionalities that came along it include:

Donut was mainly developed as an improvement of the operating system to work perfectly on different screen sizes and even different resolutions.

Another new feature that led to Android spreading worldwide and being favored by carriers around the world was the ability to support CDMA networks like Verizon.

Éclair came earlier than expected, as it was released immediately six weeks after the launch of Android Donut version.

Regardless of the quick release, it brought extensive features like live wallpapers and even the drag-and-drop lock screen.

Froyo was released in May 2010. What changes did it bring? Well, Android users whose phones supported this version could turn on the Wi-Fi hotspot and unlock their phones with numeric and alphabetic passwords instead of patterns.

Gingerbread brought a newer operating system that featured an improved user interface that was faster and simpler.

It was also equipped with NFC technology and offered the possibility of voice and video chats via Google Talk. It also allowed the use of multiple cameras, which led to the introduction of the selfie camera.

This version brought a nice user interface with a new action bar and also supported multitasking. Unfortunately, this is also one of the versions that were not very welcome on the market.

This version was introduced in October 2011. It came along with updates on the user interface, especially the introduction of the new font “Robot”, soft buttons inherited from Honeycomb and a built-in photo editor.

This OS version also allowed users to unlock their phones with biometric features, such as the face, since it supported the facial recognition feature.

The final improvement that came with this operating system was the ability to set limits on data usage. You could monitor your data usage.

The OS version Jelly Bean that was launched in July 2012 not only improved the user interface but also increased the performance.

Other improvements that came with this operating system version were the ability to interact with notifications in different ways and even expand the notification buttons.

This feature allowed users to turn on and off all types of notifications in an application depending on their preferences.

This version of Android OS was named after the famous KitKat sweets and was released back in September 2013. It introduced many pillar improvements and functions.

The first and most important is its capability of being able to run on smartphones having 512 MB of RAM. This made several devices able to update to this version.

KitKat also boasted of having white elements instead of blue ones. Lastly, it was also the first-ever version to have the “Ok, Google” voice command service.

At the end of 2014, Google decided to release the Lollipop OS version. This version brought several improvements, such as Project Volta, which was supposed to improve battery life, and also Material Design, which consists of transitions and animations, shadows and even light effects.

Finally, the new feature known as Tap and Go allows its users to transfer all their data to a new device through NFC and Bluetooth technology.

Announced in May 2015, the Marshmallow version was then officially released in October of the same year. This version came with the native fingerprint reader, USB - C and also Android Pay, which is since then known as Google Pay.

Have known which Android OS version introduced the split-screen feature that allows users to run two apps simultaneously? Well, it was Android 7.0 - Nougat.

Besides this amazing feature, this version also introduced a customizable pull-down menu, then the fingerprint gesture to swipe down and also added some other emojis. Another improvement that was not easily noticed was the support for the Vulkan API an approach influencing future updates.

However, the most important change was the introduction of Project Treble, which is a modular architecture designed to help hardware vendors keep up with evolving Android versions in a simple and fast way.

Chances are, if you are reading this article, you are using Android 9.0 Pie. Because even though it was released at the end of 2017, it is still the most popular OS version.

A new home button has also been introduced, leading to an extended navigation button at the bottom of the screen.

Besides the performance boost, battery optimization, and other security improvements, this version also introduced the Shush function, which puts the phone into Do Not Disturb mode when you flip the screen down.

This is the very first Android OS version that has dropped all iconic names related to sweet treats that were seen in previous versions. This might have resulted in the lack of sweet names or a change in marketing strategy.

This version in 2019 brought tons of security updates and a large amount of support for APIs and also support for the foldable phones that were supposed to be introduced at that time.

A year after the release of Android 10, Google introduced Android 11, which offered several options to manage notifications and also controlled upgrades to monitor smart home devices as we embrace the Internet of Things in our lives.

At the time of this article's publication, the latest Android operating system is available in Android 12, which was released in October 2021.

According to information from the Android Developers Blog, this operating system offers the best user experience, improved energy efficiency, and easier Wi-Fi sharing, among other improvements.

A few days ago, the first announcement about Android 13 was published. Not much is known yet, but exciting new features are in store. The fact that it will be possible to run Windows on a virtual machine on Android 13 in the new Android version is discussed quite intensely. As Android developer Danny Lin (aka kdrag0n) has shown on Twitter.

In summary, we see that every new Android version brings exciting new changes. Android 13 will not be the last version of the popular operating system. In the future, Android will continue to evolve. Stay tuned for more groundbreaking changes. The acronym HMI stands for human-machine interface and is used to describe a user interface or...
Read article