From now on you can run Android 13 on Raspberry Pi for the first time and enjoy the updated features and capabilities that the new Android version offers. The combination of Raspberry Pi 4 and Android 13 has several advantages. It enables new use cases and stabilizes some that are already in place. The OS not only promises new functionality but also implies that Raspberry Pi 4 will continue to receive functional updates and security patches for the next few years.

Seamless system updates, also known as A/B system updates, ensure that a working copy of the system remains on disk during an Over-the-Air (OTA) update for a possible fallback in case of errors. In other words, if something goes wrong during the installation process, the device uses the old data and remains fully functional. This improves user update flow and significantly reduces the probability of downtime even if errors occur.

Changing from Userdebug to User build variant makes the overall system even more secure and removes unnecessary debugging packages, which are not needed on production devices. The most important advantage is the Android Debugging Bridge (ADB) being secured and deactivated by default, reducing the vector of possible attacks.

In line with these improvements, the emteria.OS Android 13 release adds a verification step to the boot process (AVB v2). Verified Boot ensures the integrity and authenticity of the software running on a device. It establishes a chain of trust, ensuring during boot-up that the code being executed origins from trusted sources. This adds an extra layer of security to the boot process, preventing potential bootloader exploits from compromising device security.

All changes are complex and will require further testing in the coming weeks to fully evaluate the impact of the adjustments in the field on our customers’ devices. But we are very happy to announce that they are for the first time implemented in an Android-based image for Raspberry Pi. This is an important improvement toward more secure updates for all Raspberry Pi Android users out there relying on emteria.OS.

Current status after first tests of the build

We are currently working on fixing some issues that we discovered during testing. Currently, the following things are working without issues: 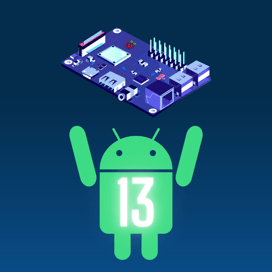 All missing functions will follow in the next few days.

What improvements does Android 13 deliver?

Google pushed the Android 13 source to the Android Open Source Project (AOSP) earlier this week and officially released the newest version of Android - Tiramisu. Tiramisu is more of an iterative update but has a few nice surprises on board. Android 13 comes with enhanced security, more personalization options, and improved media output. Here are some of those improvements that could be useful for certain use cases in which Raspberry Pi is running Android 13:

Android 13 offers a better experience on tablets and large screens. Google introduces new features like improved taskbar and layouts. Additionally, they made some optimizations in the system UI, within system apps and improved compatibility modes for apps.

These customizations are especially useful for all use cases where Android runs on Raspberry Pis that operate connected touchscreens such as point-of-sale systems, various terminals in logistics and other industries, or digital signage solutions.

Android 13 gives the user more options to control app access to their files by allowing them to personalize which photos and videos can be used. Additionally, the clipboard is automatically deleted to protect copied data such as phone numbers, login data or addresses. Besides, apps need explicit confirmation to send system notifications. Only after users have agreed notification is enabled.

When companies deploy devices to employees or customers, they need to ensure that these devices are safe not only from external threats such as installed applications that can access sensitive files, but also from users who are unaware of the risk of copying sensitive information such as customer data or credit card details. Therefore, Google's new precautions will be well received by corporate security departments.

With the release of Android 12 Google introduced the Material-You design which gives users more options to customize their user experience. Android 13 extends Material You to apps that are not provided by Google. This way personalized color schemes can be used for all apps. Especially interesting is the new function to specify which languages apps are using. This functionality is dependent on the defined system language.

Personalized color schemes help companies to customize their devices to their corporate identity more easily. The feature to enable applications in different languages can be especially useful when running apps on devices in kiosk mode. The ability to separate the system language from the device language provides easier support options for companies that deploy their devices and applications in multiple locations with different local languages.

Besides the security and personalization options, the Tiramisu update offers some enhanced new audio features (Spatial Audio), Bluetooth LE support, and better differentiation between an input pen and the user's hands for more accurate results.

The last point is interesting for professions in an industrial environment such as technicians and engineers who operate devices by hand or, if they wear gloves, often with a pen. Inputs become more precise and offer less room for avoidable errors.

Check out Google’s official summary on all the new features now also available for RPi4 by emteria.

How to install Android 13 on Raspberry Pi 4

Sounds exciting? Why not try it out for yourself? Emteria specializes in bringing Android to Raspberry Pi and other supported hardware to realize industrial embedded solutions with Android. Of course, we support our users and customers not only in implementing solutions on a large scale, but also to help them with the prototyping phase. With our starter plan you can test out the advantages of Android 13 on Pi 4 for free.

This is a short intro in how to install Android 13 on Raspberry Pi: 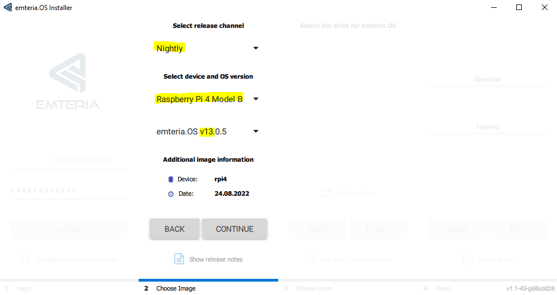 Find all necessary tutorials on how to get Android running on your Pi in our Knowledge base.

Here is a useful collection of tutorials to help you on the way:

We hope that many of you will install Android 13 on your Pis. Let us know how it goes and if you encounter any unexpected issues. The live version of emteria.OS based on Android 13 will follow soon. We'll keep you posted on the latest news.

Sources: Google - Android 13 is in AOSP! In our last blog post, we have pointed out how managed operating systems (OS) support fleet...